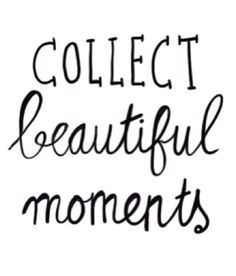 So many moments meld together to create our life stories. Often these moments can be as simple as a smile, a hand shake or a kiss. But then again, they can be as huge as giving birth, getting married, graduating from college or even a hike on a beautiful summer afternoon.

My moments have come in all shapes and sizes throughout my life. Sometimes they stand out in my mind like they only happened yesterday.

One that seems like it only happened hours ago… A month before my wedding in 2007, my orthopedic surgeon decided that getting Cortisone shots in my knees would be helpful in anticipation of the hours of standing and walking as part of our wedding. To my surprise, I asked my stepson, Timothy, if he wanted to go to the appointment with me and he responded, “Sure.”

Timothy and I drove to the far end of St. Louis to get the shots in my knees. Of course, he drove because he hated my driving, then he sat in the room while I got stuck with the needles rather than staying in the waiting room. Afterwards we went to lunch at one of his favorite places – Lion’s Choice. We started talking about this 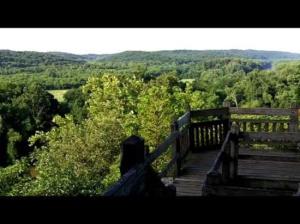 gorgeous place at a local park my friends and I would go when we were in high school because of its amazing view from one of the bluffs of the Meramac River. He wanted to take his current girlfriend there someday because I raved about it so much. So the two of us decided to find the park and the overlook. Because the hitch was it had been so long since I had been there, I had kind’ve forgotten where it was. I was surprised to find that he was open to spending the afternoon trying to find the park and then walking to find the overlook. It wasn’t until we were halfway up the bluff when we both realized this may not have been the brightest idea — to go hiking after just getting Cortisone shots. My knees started to swell and ache instantly. But either way, we had a good time just hiking through the woods and talking about all the insane crap he had done so far in his short life, his hopes, his plans for the future, my life, the things I had done in college and high school and even my hopes and dreams for him. At one point, I just couldn’t climb up the hill any more without help and Timothy put out his hand to help me climb the remainder of the hill. Then after finding the overlook, on the way down, he reached for my hand without even saying a word because he knew my knees were probably about to give out. 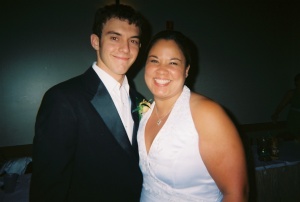 That moment helps me remember how awesome our relationship once was, how much I miss him and how lucky I was to have him in my life. In that elongated moment, we weren’t just parent and child, but instead two friends hanging out, talking about nothing and everything.

But of course, when I stop to think about my life, a variety of other random moments pop up into my head. Moments that make getting up in the morning even easier despite the loss and pain we’ve endured in our lives.

The hours and hours of laughing I have had with my stepdaughter throughout the last 15 years I’ve shared with her. Most recently, the times I was able to spend with her as she got ready to become a mother of her own. We may have resembled to giggling teenagers as we roamed the aisles of Babies R’ Us when she was finishing her baby registry because luckily one thing the two of us do best when we’re 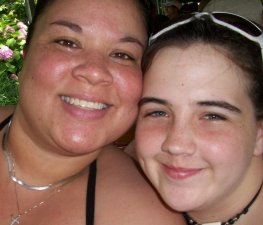 together is make each other laugh. I cherished the opportunity to help her in any way I could as she was about to become a mother because it makes me feel like I may have done one or two things right as I stood alongside her father all those years when she and her brother were growing up.

It’s hard to believe though because I can still remember that seven year old little girl sitting in the passenger seat of my car, jokingly mimicking her father’s dancing as we drove back from the mall one night after going shopping. We both laughed until we cried, which I believed may have broken a lot of the ice for our relationship that lay ahead for the years to come.

Moments can come quickly, so fleeting sometimes they can make our heads spin. We could miss them if we don’t stop just long enough to make sure we notice their importance.

In grade school, my parents took me out of our neighborhood catholic school and sent me to another catholic school that was almost 30-45 minutes away from our house. Most mornings, my mother would drive my brother to his high school then take a short cut through Webster Groves to drop me off at my elementary school in Kirkwood. Every now and then my father got home early enough from working nights that he would take us to school. Those were the trips I remember because it was just me and Pop for those 20-25 minutes from my brother’s high school to my grade school. And we would just talk about nothing and everything. While I know, I was just a silly little girl at the time. There was nothing that I loved more than spending time with Pop. I remember if we had enough time, we would stop at Hardee’s and have cinnamon raisin biscuits before he dropped me off for school. It was always supposed to be our little secret too. But it’s one of those secrets that has never left me. To this day, I always think that a cinnamon raisin biscuit from Hardee’s is a special treat that makes me miss Pop.

When I was a freshman in college, I walked the St. Louis Marathon with my father. I had trained alongside him and I even dragged another friend of mine along for the ‘ride’ one day as I trained for this monstrosity that I had no idea if I was actually ready to walk when the day came. And the day of the race will never leave my memory because my father had all the confidence in the world that the both of us could finish the race. My father, who had already run multiple marathons, had no qualms with understanding that I wasn’t going to run except maybe downhills, but in fact that I was planning to find my comfortable “mall” walking stride and take to it for the entire way. I loved that day because it was just me and him, pretty much taking a walking tour all over St. Louis. But of course, to my detriment my knees gave out around 23 miles and the walking became just too painful. I had trudged through about 2-3 miles before finally admitting that it had gotten too bad with tears in my eyes because I knew exactly how close I really was to the finish line. So my father sent me off to the my great aunt’s house who luckily lived right by where my knees finally blew and I waited for my parents to arrive. While the marathon itself was quite the feat, I’d do it again to relive the torture to have those 6+ hours with Pop all over again.

Our lives are filled with moments whether they last days, hours, minutes or even just seconds, to help create the story of our lives. But so often those moments are not only meant to make us smile or bring a tear to our eye; instead they can help us see the true side of humanity – the best side of humanity. You know the side of people that helps us believe that this society isn’t really going to hell in a handbasket, but in fact the good that still lies in most of us.