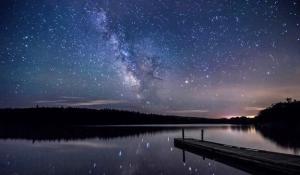 After spending my entire life living in some suburb of St. Louis, I fully admit to being a city girl. While I don’t necessarily love the hustle and bustle of big cities and the continuous traffic and mayhem that comes with living near a city, I do believe that I would find the constant quiet and lull of the country eventually maddening because I’ve never known it for any longer than a week at a time.

I’m not a bug person or an outdoorsy person. I love my air conditioning, not only because I am a big girl but over long periods of time, I just don’t like to become overheated. But then again who really does? And of course, I like having a barrier between nature and myself such as a wooden door, not a flimsy zipper on a tent.

But that being said nothing, and I mean nothing, beats a starry night out in the country on a summer night. The stars are so close, you feel like you could touch them. And there are so many of them, you think they could fall on your head at any moment in a sudden star shower. 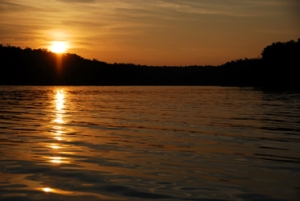 Years ago, we were trying to find a place for nice little weekend trip that would be both inexpensive and fun. Really unsure of where to go, my then-boyfriend suggested a lake near the tip of Missouri and Arkansas – Bull Shoals Lake. Since I had never heard of it before, I started researching it because that’s what the reporter in me does.

What I found was… Crystal clear water. Family run resorts. Cliff jumping. Scuba diving. And one website said their guests often felt as if they had their own private cove because of the lack of boat traffic. Sweet!

So the planning commenced. And a small group of us – my then-boyfriend, his son, his cousin, the cousin’s girlfriend, and my boyfriend’s brother – went down for a weekend to Fish-Un-Time Resort, where we had a blast for four days straight. While we were down there, we also hung out with other family members who knew quite well already about this gem of a lake.

The water was so clear you could see your feet dangling in the water. And in parts of the lake, the trees that had sunken down 60 to 100 feet looked as if they were only a few feet from your toes. This place was amazingly secluded and gorgeous.

But at night, the stars came out like a Lite Brite game as brilliant as if you stuck them each in their places yourself. Standing in the field just outside our ‘cabin,’ the sky just lit up.

I do have a common saying among friends and family, “We don’t get stars in the city.” Because to be honest, I’ve never seen stars as brilliant and amazing as the ones in that Arkansas sky anywhere around our house near St. Louis. That being said, I’ve been on rooftop bars, backyards and patios in St. Louis, where the sky was full of stars. But nothing has compared to that Arkansas night sky. 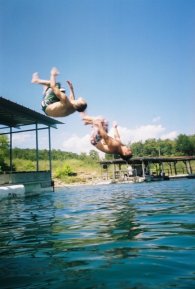 The following year about a month and a half after my boyfriend and I got married, we traveled back down to Arkansas with his entire extended family of about 30 people, minus a few cousins, to celebrate his 40th birthday and his father’s 60th birthday. I had become so enamored by this lake and its beauty – daytime and nighttime – that I thought it would be the perfect setting for this birthday bash.

And it was.  During those four days, there was no shortage of smiles, laughter, hugs, new bonds formed and old bonds mended. But then the Pièce de résistance happened the Friday night of the trip when about 30 of us ventured back down to the dock, tied a bunch of giant inner tubes together and floated out into the middle of the cove on a 75-foot ski rope and watched a meteor shower from the best seats on the lake.

Life was good that summer. Hanging out on the water in the dark with my new husband, my stepson, my husband’s family, who incidentally are some of my closest friends, listening to the silence of nature, watching the stars literally explode above us and swim across the sky and each of us sharing stories and laughter. It felt as if the sky was putting on a show just for us that night. No need to buy a ticket or make reservations, just float on out, pop open a beer and be amazed with the show in the sky.

That’ll be seven years ago this August. Looking back now, life almost seemed as if it was simpler then – a little less rough around the edges and a tad more happiness laced through the foundation.

Our family has continued to go to the lake since that first celebration. New family members attending, others not returning, and those we know are yet to be born but will one day experience the family lake trip like the rest of us. But while each of the trips that have followed have been great with their own incredible moments and given each of us an opportunity to be in the same place at same time, that first family trip was the only one that has ever truly felt as if it were an “unplanned, go-with-the-flow and just smile” kind of vacation just meant to bring everyone together as a family.

So looking back, there may be something to that simple country life that people are constantly talking about with their back road driving, drinking under the stars, kissing by the moonlight and hangin’ with friends by the light of the fire. So I’ll stick to what I always say, “We don’t get stars in the city.” 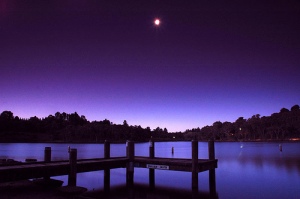 One thought on “No Stars in the City”