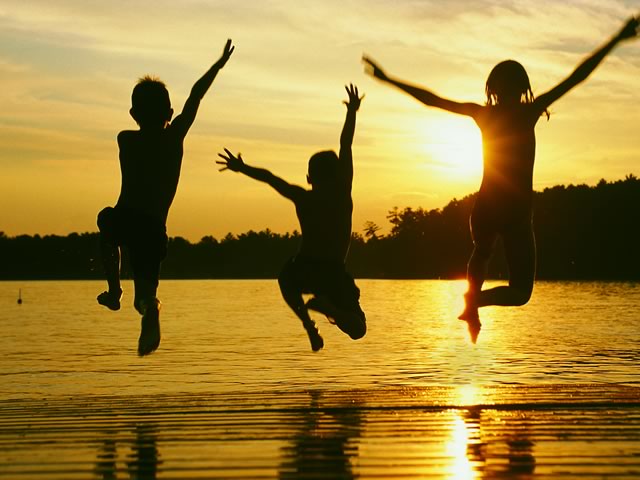 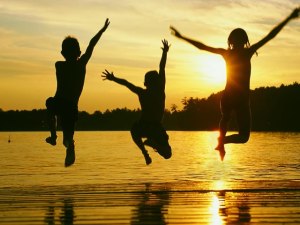 Ever had one of those summers where every event still plays on repeat in your mind like it happened yesterday even if it happened years ago? Or did you ever have a friendship that lasted only for a summer, a semester or even just a few months at a job where the bond was so tight and then for no reason at all it just wasn’t anymore?

Throughout our lives, we constantly hear that when people come in and out of our lives, there is most likely a purpose for it, whether it is for a short time or even a long time.

But as I get older and look back on the friends and acquaintances I’ve had in my life, I have to believe that it is true. We may never know what the reasons are, but sometimes just their existence alone in our lives is enough to change the course or direction we are heading at the time.

A few weeks ago, I was invited to a 40th birthday party of a friend of mine who I hadn’t seen in years. Unfortunately with schedules, children, work and life, we have just not been able to get together for drinks, lunch, dinner or even coffee in the last couple years. But as I walked around the corner of the bar with my husband and saw my girlfriend, I was suddenly taken back to the one summer during college where she and I were inseparable. I believe I spent more time at her house than I did my own. She is a few years older than me, which at the time made my mother leery because she was 21 and I was not.

But that summer remains as vivid in my memory as if it happened yesterday. Like a country song, the two of us had many a day of driving on the highway with the windows rolled down, singing our hearts out with the radio, and often too in the middle of the night we’d find ourselves driving those same highways without a true care in the world. The boys that summer were forgettable, except the one, of course, she ended up marrying. Ha! But for those five or six solid months, it was the two of us against the world. I introduced her to every one of my friends, who came to know her and expect her alongside me when I showed up at a party or an event.

And then… well, I think life just happened. There was no fight, no argument, no falling out, no bad feelings. Because to this day, I believe I still love that woman as much as I grew to that summer. She helped me find the woman I wanted to become – strong, caring, vivacious, outgoing, a bit on the fearless side and open-minded.

Since then, our lives have gone their separate ways with husbands, children, and careers. But I truly believe I could call her at a moment’s notice and she’d be there as soon as she could. 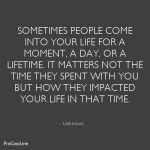 Life really does move in mysterious ways. And an instruction book would just make it too easy and what’s the fun in that.

People have come in and out of my life after several months or years of friendships and even months/years of being acquaintances. But I think most have had their own individual significance in my life.

A few years ago, a person who I believed was one of my closest friends chose to exit out of my life with no real explanation or excuse. She had stood next to me during the best times and the hardest times of my life, and then she was gone. And gone enough that when I saw her again recently, she walked right past me as if she was just another stranger in my life.

But even those situations, I believe that we are being tested whether by God or even by ourselves. Testing our strength, our endurance and our courage to not have all the answers and continue to move forward with the knowledge that we may never know.

I have never been the type of person to just shut off my emotions and my feelings when it came to letting people go whether it was ex-boyfriends, friends, or even the deaths of loved ones. And in my life, it didn’t always make for ending things on good terms easy because I didn’t know how to just say good-bye, start over and move forward.

But sometimes picking yourself up, wiping off the feeling that the crap leaves behind and moving forward is the only options you have. Because there are better reasons to fall apart and pull the covers over my head. And unfortunately in my life, this particular instance was not one of those times after the last two years I had just endured before her exit.

Except I think that’s one of the things the people coming in and out of lives are supposed to teach us in general – it’s not always a sure thing that people are going to stay so don’t take anything for granted.

Because even if I had not lost that friend, I know that person you believe is your closest friend today may not be the same person tomorrow due to circumstances beyond our control. And maybe that stranger who took the second to smile at you for no reason helped turn your day from a really bad one to a not-so bad one. And a simple act of kindness was enough to keep you from jumping off the proverbial cliff.

I’ve always been the type to bring so many types of people together as far as friends I knew in high school, college, different jobs, etc. It has just been a belief of mine that life is too short and the more people you know the better. Every connection is worth it. The bridesmaids in my wedding was a true example of how I love to bring my life together – high school, college, newspaper and my new family.

Relish everyone who comes into your life because whether it’s the stranger who holds the door open for you at the store, the old college friend who you barely see but still love dearly or the new office mate who just seems like she will turn out to be a great new friend – don’t count anyone out for potentially being the next person to help change your life or at least the direction it’s heading at that moment.