Nearly 15 years after I first walked into my husband’s life, it is hard to fathom that my stepdaughter is now a mother of her own after giving birth to a beautiful baby girl this week.

Since I was only 23 when I walked into my then-boyfriend’s kids’ lives, I can only imagine that at the time it was a lot to swallow for a 7- and 10-year-old.  The life they had known for their entire, albeit short, lives was now changing altogether. They didn’t only have to get used to going back and forth between two houses and two parents’ lives, but they were also having to get used to this new woman who had just come into their dad’s life and didn’t appear to be leaving any time soon.

While Timothy was never really a hard person to figure out, my stepdaughter, Taylor, sometimes was a tough cookie to break because she often spoke in single word conversations and she too had a nasty habit of bottling up her emotions until they exploded.

Timothy was pretty straight forward and honest. If he was mad at you, he would tell you. If you were annoying him, he would let you know. And if he was happy, excited or just in one of his silly moods, it radiated all over his entire body.

Taylor has a silly side, a serious side, an angry side and “sometimes I just want to cry” side. When you get her talking, you usually can’t get her to stop. She can sometimes come off not too friendly, but she is really just being shy not mean. She loves her Disney movies and all the characters too. And while the child in her still comes out every now and then, she has become a beautiful young woman.

And when it comes to my stepson, there are so many things that I miss about him every single day that I’m sure I could fill up a book. But probably no one would want to read it other than his family and friends who miss him just as much as me. But being his stepmom felt more like a privilege, especially during those days after his death between his accident and his funeral because the outpouring of love that was bestowed upon all of us by so many people was nothing but overwhelming. At 18, he had become an incredible young man with the potential to move mountains.

And at times, I find myself crying for what others may think is absolutely no reason at all. But I know the reasons. My husband knows the reasons, along with my stepdaughter and our family and close friends.

As a new life was brought into this family this week, we are reminded of the miracle that we are given every day that we open our eyes with air in our lungs to breathe and the opportunity to live another day, kiss and hug our loved ones and make a difference in some way – big or small – in the world around us. 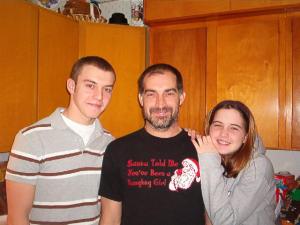 After Timothy’s death, all of us continued to struggle through the pain, especially Taylor. But for her, she needed to also find a place in this world without the invisible shield that was always her big brother. While they were the perfect brother and sister who didn’t always get along, their love for one another was indescribable. And while finding the strength to keep moving forward comes easily for no one, I can only imagine for a 16-year-old who only wanted her big brother to come home like the rest of us, that strength seemed unattainable because she always had Timothy there to help her with everything. But over time through her own successes and her own failures, we have watched her grow and mature into a strong woman who still has just as much potential as her older brother did to move mountains and to change the world. But most importantly, she has the knowledge, the intuition and compassion to be an incredible mother.

Sometimes we have no idea why life hands us the situations it does whether to test our strength, to show us the right path, to give us clarity or to just make us better human beings.  And while we will crowd in the room to take turns holding this beautiful baby girl, most of us will know there is a presence missing from the room – a pretty large one. And while I know in my heart, he never left his little sister’s side when her pain became too intense to bear and when Taylor finally rested in her quiet room before the delivery and in the crowded delivery room when everyone else around her was just trying to help. He was there, standing beside her giving her strength because that’s what big brothers do when their little sisters need them.

While our tears continue to flow for the lives we have lost, the beauty of new life must also be cherished and held close to our hearts, not as a replacement for those who have died, but rather as a gift to remind us how truly precious our lives are each and every day.

One thought on “And then They Grow Up and have Babies of their Own. Where does the Time go?”